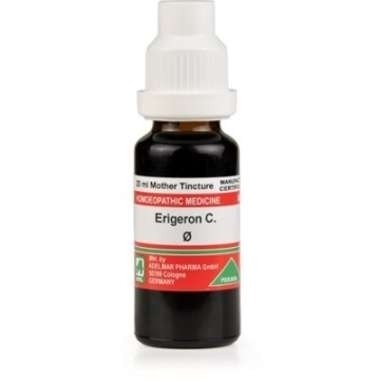 ERIGERON CANADENSE MOTHER TINCTURE This remedy is well known for bleeding and congestion from all parts of the body. This herb is commonly known as Horse weed and leaves are used for preparing homeopathic medicine. Throat Sensation as if something lodged in the throat. Haemorrhage or bleeding cured by this medicine like: Bleeding from the bladder Bleeding from the urethra Bleeding from the uterus Bright red bleeding Burning while urinating Female ailments Severe bleeding with discharge from the vagina Bright red bleeding during menstrual cycle. Discharge between menstrual cycle which comes in gushes worse by least motion. White discharge with irritation while urinating Prolapse of uterus Miscarriage from exertion Dosage-15 drops of Erigeron Canadensis mother tincture in half a cup of normal water twice each day for 3 months unless otherwise prescribed by the physician. Can be taken along with allopathic medicines. Side Effects: None Precautions Maintain half an hour gap between food/drink/any other medicines and homeopathic medicine Avoid any strong smell in the mouth while taking medicine e.g. camphor, garlic, onion, coffee, hing. Similar drugs-Terebinthina