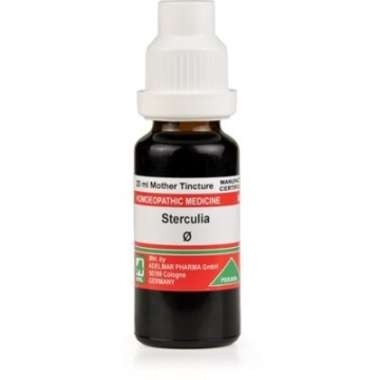 STERCULIA COLA MOTHER TINCTURE Sterculia cola is also known as Kola. This homeopathic remedy is prepared from the Sterculia plant. It is indicated for the following conditions- Alcohol deaddiction- It reduces the craving for liquor/ alcohol. Kola has positive effects on persons appetite and digestion power while they keep away from alcohol. In controlling asthma- cough, breathlessness, and sputum. It is used for persons with weak heart (poor ejection fraction) and it improves their ability to sustain physical exertion. Dose-15 drops of Sterculia cola mother tincture in half a cup of normal water twice a day until symptoms disappear or as prescribed by physician. It can be taken along with allopathy medicines. Precautions: Maintain half an hour gap between food/drink/any other medicines and homeopathic medicine. Avoid any strong smell in the mouth while taking medicine e.g. camphor, garlic, onion, coffee, hing. Side effects- None reported Similar drugs- Coca