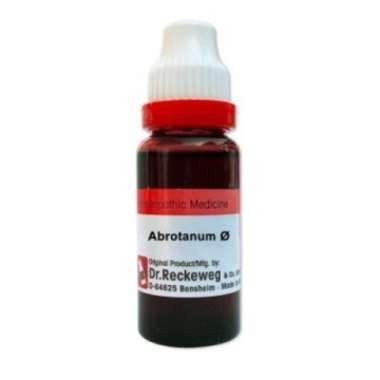 ABROTANUM MOTHER TINCTURE Abrotanum is a remedy prepared from the stem and leaves of the plant commonly called Southernwood. The homeopathic mother tincture is especially useful in the following conditions Malnourished children. Marasmus i.e. a state of severe malnutrition because of energy deficiency. Thin legs are seen especially. Cases where child is weak even though the child eats well or has excessive hunger. Depressed and irritable children. Rheumatism- Severe pain in small joints of fingers, toes after an attack of loose motions . Gout- Swelling and pain of ankle and wrist joint due to high uric acid levels. For cases where cancer cells have spread all through the body i.e. cancer metastasis. Dose- 15 drops of Abrotanum mother tincture in half a cup of water twice a day until symptoms disappear or as prescribed by physician. It can be taken along with allopathy medicines. Precautions Maintain half an hour gap between food/drink/any other medicines and homeopathic medicine. Avoid any strong smell in the mouth while taking medicine e.g. camphor, garlic, onion, coffee, hing. Side effects- None reported Similar drugs- Bryonia alba, Benzoic acid, Natrum muriaticum Use under medical supervision.