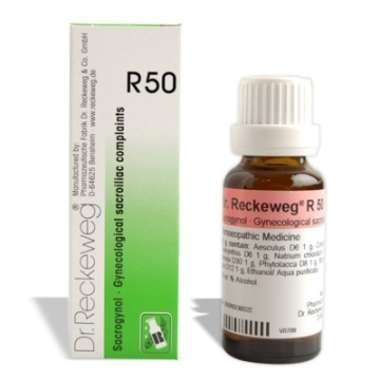 Pains of various nature in the sacral region, mainly resulting from abdominal diseases. Pains in the vertebral column, sacroiliac complaints of indefinite genesis. Pains radiating along the vertebral column up to the head and the tip of the nose, sometimes also in abdominal organs. The pains grow worse when moving but may also be acute when resting or at night. Frequently pains in the sacral region are caused by re-toxicating treatments of the fluor albus (loss of white, treatments by cauterization and others).

The sacrum is a large wedge shaped vertebra at the inferior end of the spine. It forms the solid base of the spinal column where it intersects with the hip bones to form the pelvis. The sacrum is a very strong bone that supports the weight of the upper body as it is spread across the pelvis and into the legs.

CAUSES OF SACROILIITIS AND USES OF R50 HOMEOPATHIC MEDICINE:

There are several potential causes for inflammation in the sacroiliac joints.These include :

Ankylosing spondylitis: This is a progressive type of inflammatory arthritis that affects the spine and hips. Osteoarthritis: This can cause inflammation in the sacroiliac joints and is another underlying cause of sacroiliitis.Stronium carbonium present in the drop will cure the arthritis .

Trauma: A sudden traumatic injury may damage the sacroiliac joints and cause inflammation, leading to sacroiliitis.Colocynthis and Aesculus present in the drop will cure the above defects .

Pregnancy: When a woman is pregnant, her sacroiliac joints stretch to make room for the growing baby.

This may put stress on the joints and cause sacroiliitis.Cimicifuga element present in the drug will cure the above defects .

If the sacroiliac joint becomes infected it can become inflamed.

SYMPTOMS OF SACROILIITIS AND BENIFITS OF RECKEWEG R50 :

As well as prescribed medications, the following home remedies and exercises can help relieve sacroiliitis pain:

HOW TO USE Dr. RECKEWEG R50 DROPS FOR SACARAL PAIN TREATMENT IN HOMEOPATHY :

Use under medical supervision.