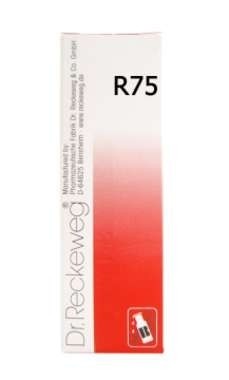 Product Details DR. RECKEWEG R75 Labour Pains and Menstrual cramps INDICATIONS Dysmenorrhoea, Cramping pains, Labour pains. MODE OF ACTION OF MAIN INGREDIENTS: The contained ingredients have an affinity to the female i.e. the reproductive organs, upon which the remedies act in such a way as to palliate the pain and to act as an antispasmodic. Caulophyllum thalictroides: Fits of lower abdominal spasms. Chamomilla: Oversensitive state. Cimicifuga: Sudden flashlike, shooting pains in the lower abdominal region. Cuprum aceticum: Severe dysmenorrhoea. Magnesium phosphoricum: Dysmenorrhoea ameliorated by natural discharges such as onset of menses. Viburnum opulus: Lower abdominal spasm extending in the thighs. Irregular menses. DOSAGE - In severe pain and in labour pains: frequent administration of 10 drops in some water every 14 to 12 hour - As improvement sets in give 10-15 drops every 1-2 hours - In dysmenorrhoea give 10-15 drops in some water 2-3 times a day over longer periods Use under medical supervision.