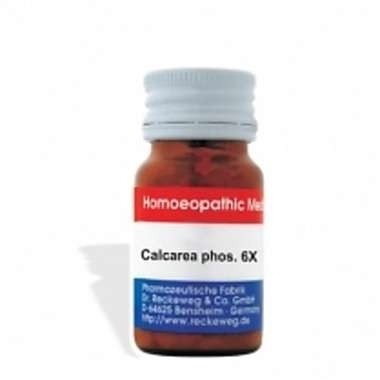 Product Details Calcarea Phos 6X Tablet is a bone and teeth supplement, it is a homeopathic medicine. Calcarea phosphoricum is the major constituent in bones and teeth. It is commonly prescribed for teething problems in infants, after dental drilling or surgery, to reduce tooth decay, and to stimulate the timely eruption of teeth. An insufficient supply of calcarea phosphoricum can result in deficient nutrition and retarded growth, thus it is often needed during puberty to encourage normal growth and development. In the same way Calc phos can be helpful to prevent fractures and reduce osteoporotic tendencies in the elderly. Cell salts work well together when combined. For example, for delayed dentition in children (teeth are erupting too slowly or late), Calc fluor, Calc phos, and Silicea are often prescribed together. And since Mag phos helps harden dental enamel, it is often combined with Calc fluor, Calc phos, and/or Silicea post-dental drilling or surgery. To restore the body after major acute illnesses and to treat fatigue and anemia, Calc phos and Ferrum phos are often taken together. Additionally, Calc phos and Mag phos are often prescribed in combination to treat muscle or menstrual cramps and spasms. Direction for use: Infant- 2 Tablets 2 times a day; Children- 2 Tablets 4 times a day; Adults- 4 Tablets 4 times a day Use under medical supervision.