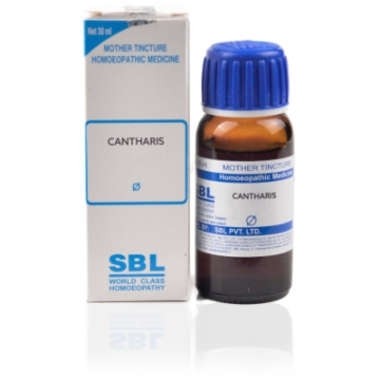 The whole Spanish fly is used in making this homoeopathic remedy, Cantharis Vesicatoria. Mind Extremely restless which ends in becoming furious, has to constantly do something Anger , weeping , suddenly losing consciousness with the face turnind red. Constantly attempts to do something, but accomplishes nothing Eyes are red like fire with lots of burning. Face Face is red , burning when it is touched. Pale, wretched, death-like appearance Throat Severe burning sensation , liquids are very difficult to swallow. Throat is swollen and restricted. Burning in mouth, pharynx, and throat; vesicles in mouth Burnt after taking too hot food Stomach Lot of burning in stomach and food pipe with a lot of unquenchable thirst , but avoids all liquids, and is worse from taking coffee. Disgust for everything-drink, food, tobacco Aggravation from drinking coffee Thirst unquenchable Stools Dysentery, burning and shivering after passing stools. Urine Severe burning and violent pain when passing and so passes it in drops. Strong desire to urinate. Increased sexual desire in males and females. Skin All sorts of burns, scalds with a lot of red hot swelling , gangrene, eruptions with vesicles. Secondary eczema about scrotum and genitals, following excessive perspiration Burning in soles of feet at night Dose- 15 drops of Cantharis mother tincture in half a cup of normal water twice each day for 3 months, unless otherwise prescribed by physician. Can be taken along with other allopathic medicines. Side effects: None Precautions Maintain half an hour gap between food/drink/any other medicines and homeopathic medicine. Avoid any strong smell in the mouth while taking medicine e.g. camphor, garlic, onion, coffee, hing. Similar drugs: Aconite, Camphor, Pulsatilla Use under medical supervision.