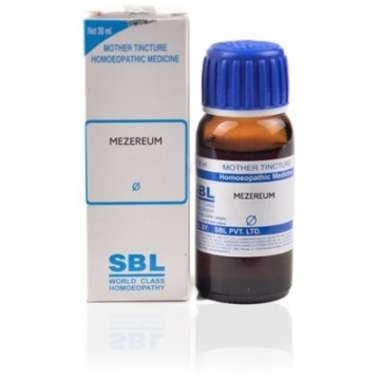 MEZEREUM MOTHER TINCTURE It is a remedy used in homeopathy made from a plant source, commonly known as Spurge Olive. Suited to those who are extremely sensitive to cold air. Given to all kinds of pains with coldness. Excellent remedy for skin eruptions that occur after giving vaccinations. Head Head covered with thick, leathery crusts, under which pus collects Good for headaches which increase when the patient talks. Roots of teeth decay Ear Ears feel like the ear drums were exposed to the cold air and it blew in the ears. Desire to bore fingers in Stomach Good for long standing stomach ulcers with a lot of burning. Desire for ham-fat. Burning in tongue, extending to stomach. Mouth waters Chronic gastritis Gastric ulcer with much burning Urine Cramps in bladder region which are followed by blood in urine. Burning at the end of urination. Male Swelling of testicles, increased sexual desire. Gonorrh艙a Skin Unbearable itching, with a lot of coldness Long bones are red and swollen Tendency for the eruptions to form ulcers and there is collection of pus underneath a thick layer of scabs. Eczema; intolerable itching; chilliness with pruritus; worse in bed Eruptions ulcerate and form thick scabs under purulent matter exudes Dose- As prescribed by physician. Can be taken along with allopathic medicines. Precautions Maintain half an hour gap between food/drink/any other medicines and homeopathic medicine. Avoid any strong smell in the mouth while taking medicine e.g. camphor, garlic, onion, coffee, hing. Side effects- None reported Similar drugs: Merc, Phytolacca Use under medical supervision.